From a Maine House, a National Foreclosure Freeze 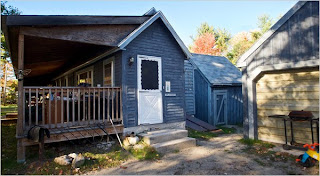 By DAVID STREITFELD
Published: October 14, 2010
DENMARK, Me. — The house that set off the national furor over faulty foreclosures is blue-gray and weathered. The porch is piled with furniture and knickknacks awaiting the next yard sale. In the driveway is a busted pickup truck. No one who lives there is going anywhere anytime soon.

Nicolle Bradbury bought this house seven years ago for $75,000, a major step up from the trailer she had been living in with her family. But she lost her job and the $474 monthly mortgage payment became difficult, then impossible.

It should have been a routine foreclosure, with Mrs. Bradbury joining the anonymous millions quietly dispossessed since the recession began. But she was savvy enough to contact a nonprofit group, Pine Tree Legal Assistance, where for once in her 38 years, she caught a break.

Her file was pulled, more or less at random, by Thomas A. Cox, a retired lawyer who volunteers at Pine Tree. He happened to know something about foreclosures because when he worked for a bank he did them all the time. Twenty years later, he had switched sides and, he says, was trying to make amends.

Suddenly, there is a frenzy over foreclosures. Every attorney general in the country is participating in an investigation into the flawed paperwork and questionable methods behind many of them. A Senate hearing is scheduled, and federal inquiries have begun. The housing market, which runs on foreclosure sales, is in turmoil. Bank stocks fell on Thursday as analysts tried to gauge the impact on lenders’ bottom lines.

All of this is largely because Mr. Cox realized almost immediately that Mrs. Bradbury’s foreclosure file did not look right. The documents from the lender, GMAC Mortgage, were approved by an employee whose title was “limited signing officer,” an indication to the lawyer that his knowledge of the case was effectively nonexistent.

Mr. Cox eventually won the right to depose the employee, who casually acknowledged that he had prepared 400 foreclosures a day for GMAC and that contrary to his sworn statements, they had not been reviewed by him or anyone else.

GMAC, the country’s fourth-largest mortgage lender, called this omission a technicality but was forced last month to halt foreclosures in the 23 states, including Maine, where they must be approved by a court. Bank of America, JPMorgan Chase and other lenders that used robo-signers — the term caught on instantly — have enacted their own freezes.

The tragedy of foreclosure is that some homeowners may be able to stay where they are if their lenders are more interested in modification than eviction. Without a job, Mrs. Bradbury is not one of them. Her family, including her 14-year-old daughter and 16-year-old son, lives on welfare and food stamps.

“A lot of people say we just want a free ride,” Mrs. Bradbury said. “That’s not it. I’ve worked since I was 14. I’m not lazy. I’m just trying to keep us together. If we lost the house, my family would have to break up.”

It has been two years since she last paid the mortgage, which surprises even her lawyers.

“Had GMAC followed the legal requirements, she would have lost her home a long time ago,” acknowledged Geoffrey S. Lewis, another lawyer handling her case.

GMAC, which began as the financing arm of General Motors, has received $17 billion from taxpayers in an effort to keep it from failing and is now majority-owned by the federal government. A spokeswoman for the lender declined to comment on Mrs. Bradbury’s case because it was still being litigated.

John J. Aromando of the firm of Pierce Atwood in Portland, Me., the lawyer for GMAC and Fannie Mae, the mortgage holding company that owns Mrs. Bradbury’s loan, did not return calls for comment on Thursday.

Fannie Mae and GMAC, which serviced the loan for Fannie, have now most likely spent more to dislodge Mrs. Bradbury than her house is worth. Yet for all their efforts, they are not only losing this case, but also potentially laying the groundwork for foreclosure challenges nationwide.

“This ammunition will be front and center in thousands of foreclosure cases,” said Don Saunders of the National Legal Aid and Defender Association.

Just a few miles from the New Hampshire border, this slice of Maine does not have much in the way of industry or, for that matter, people. Mrs. Bradbury grew up around here, married and had her children here, and married for a second time here. Her parents still live nearby.

In 2003, her brother-in-law at the time offered to sell her a house on property adjacent to his. It was across from a noisy construction supply site. But it was ringed by maple, evergreen and willow trees, and who does not want to be a homeowner, especially when GMAC Mortgage will give you a loan for the entire purchase price and then another loan to improve the property?

“I was very happy,” she remembered. “It was a new beginning.”

But Mrs. Bradbury lost her job as an employment counselor in 2006 and did part-time work after that. Her husband, Scott, was in poor health and had other problems. He could not work as a roofer. She fell behind and got a modification from GMAC. It increased her monthly payments and provided no relief.

Finally, in late 2008, she stopped paying altogether, and GMAC asked a court to approve her eviction without a trial. By the summer of 2009, this removal was well under way when Mr. Cox picked up her file.

Mr. Cox, 66, worked in the late 1980s and early 1990s for Maine National Bank, a subsidiary of the Bank of New England, which went under. His job was to call in small-business loans. The borrowers had often pledged their houses as collateral, which meant foreclosure.

“It was extraordinarily unpleasant, but it paid well,” he said. “I had a family to support.”

The work exacted its cost: his marriage ended and a serious depression began. He gave up law and found solace in building houses. By April 2008, he said, he was sufficiently recovered and started volunteering at Pine Tree Legal.

By the time Mr. Cox saw Mrs. Bradbury’s case, it was just about over. Last January, Judge Keith A. Powers of the Ninth District Court of Maine approved the foreclosure, leaving the case alive only to establish exactly how much Mrs. Bradbury owed.

Mr. Cox vowed to a colleague that he would expose GMAC’s process and its limited signing officer, Jeffrey Stephan. A lawyer in another foreclosure case had already deposed Mr. Stephan, but Mr. Cox wanted to take the questioning much further. In June, he got his chance. A few weeks later, he spelled out in a court filing what he had learned from the robo-signer:

“When Stephan says in an affidavit that he has personal knowledge of the facts stated in his affidavits, he doesn’t. When he says that he has custody and control of the loan documents, he doesn’t. When he says that he is attaching ‘a true and accurate’ copy of a note or a mortgage, he has no idea if that is so, because he does not look at the exhibits. When he makes any other statement of fact, he has no idea if it is true. When the notary says that Stephan appeared before him or her, he didn’t.”

GMAC’s reaction to the deposition was to hire two new law firms, including Mr. Aromando’s firm, among the most prominent in the state. They argued that what Mrs. Bradbury and her lawyers were doing was simply a “dodge”: she had not paid her mortgage and should be evicted.

They also said that Mr. Cox, despite working pro bono, had taken the deposition “to prejudice and influence the public” against GMAC for his own commercial benefit. They asked that the transcript be deleted from any bl
og that had posted it and that it be put under court seal.

In a ruling late last month, Judge Powers said that GMAC, despite its expensive legal talent and the fact that it got “a second bite of the apple” by filing amended foreclosure papers, still could not get this eviction right.

Even the amended documents did not bother to include the actual street address of the property it was trying to seize — reason enough, the judge wrote, to reject the request for immediate foreclosure without a trial.

But Judge Powers went further than that, saying that GMAC had been admonished in a Florida court for using robo-signers four years ago but had persisted. “It is well past the time for such practices to end,” he wrote, adding that GMAC had acted “in bad faith” by submitting Mr. Stephan’s material:

“Filing such a document without significant regard for its accuracy, which the court in ordinary circumstances may never be able to investigate or otherwise verify, is a serious and troubling matter.”

It was not a complete loss for GMAC — Judge Powers declined to find the lender in contempt — but nearly so. GMAC was ordered, as a penalty, to pay Mr. Cox personally what he would have been paid for his work on the deposition and related matters had he been charging Mrs. Bradbury. That, he says, is $27,000.

The court’s ruling on GMAC’s “bad faith” is already being taken up by foreclosure defense lawyers around the country. Mr. Cox “did a remarkable job of proving the lenders not only rubber-stamped these loans on the front end, but they rubber-stamped them on the back end,” said Mr. Saunders of the legal aid group.

GMAC, which this week expanded its foreclosure freeze to the entire country, is not giving up on Mrs. Bradbury. It will try for the third time to evict her when the case goes to trial this winter.

If Mrs. Bradbury is not quite victorious, she is still in her house, and for her that is the only thing that counts. If she can get her pickup fixed, she will go back to looking for a job.

“I am not leaving,” she said this week, standing out on her front lawn, the autumn splendor spread all around her. “We have nowhere to go.”

(912) 200-3897
Share Tweet Pin LinkedIn Google+ EMAIL
1200
SHARES
You may also be interested in...
This Month in Real Estate (US) : October 2010
The latest from Keller Williams Realty International… “This Month in Real Estate.” Want To Learn More? Call us today! (912)...
Ten Ways to Green Your Home Under Ten Bucks
(and if you don’t have ten bucks, five that are free)By Lloyd AlterWed Jan 21, 2009 17:08 Free. Nothing. Nada.Things...
Community Profile: Historic Downtown Savannah
Savannah’s founder, General James Oglethorpe, had already planned the layout of Downtown Savannah when he arrived here in 1733. His...
Questions About Real Estate?
Let's Schedule A Time To Talk.
Contact Us