Craftsman Bungalow and Craftsman style homes were born out of the Arts and Crafts Movement. The emphasis is on natural materials — wood, stone and brick. Wide front porches and low-pitched roofs are typical. The interior’s open floor plan features built-in furniture, big fireplaces and exposed beams. This is extremely easy to find in the Parkside neighborhood. Back in the 1600s when Colonial architecture originated, there were many variations of the style due to the diversity of early American settlers. Known for its symmetry, Colonial architecture is most often characterized by evenly spaced shuttered windows. Dormers, columns and chimneys are also evenly proportioned to complement the formal style. Any type of Colonial home can be found in the Ardsley Park neighborhood! Originating in the early 1600s, this Dutch Colonial style of house began as one room for early American settlers. Easily recognized by the broad gambrel roof, the style typically features dormers, flared eaves extending over the porch and a decorative hood over the front entryway. It may also have a centered Dutch double doorway, which was originally used to keep animals from entering the home, while still allowing fresh air to flow through the home. In fact, this house style is also known as a “barn house,” because of its striking resemblance to a typical barn. The Federal Colonial style, also know the Adam style, is modeled after Roman classicism . Similar to the Georgian Colonial style, Federal Colonial style differs with the addition of wings off to each side of the original box shape and tends to have more decorative embellishments than other Colonial styles. Federal style homes are most often made of brick. The front facade screams wealth with its ornamentation, tall columns and grand curved steps that lead up to the entrance. An elliptical or fan-shaped window usually tops the door, with long rectangular windows placed symmetrically on both sides of the doorway. 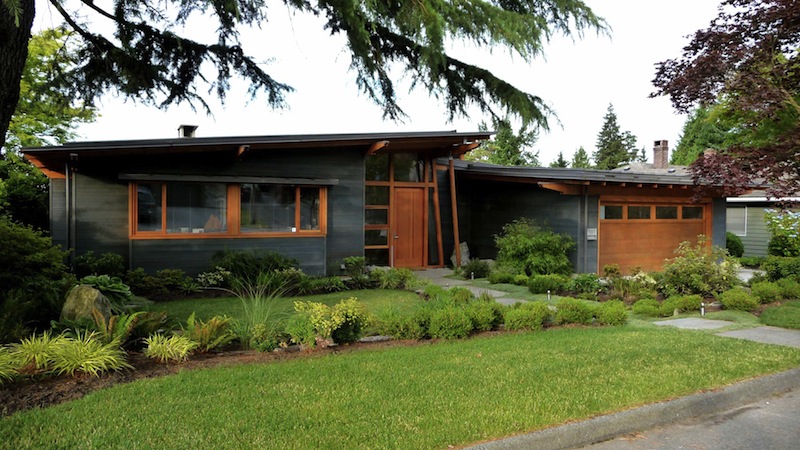 Constructed out of new ideas, mindsets and a forward-thinking style, mid-century modern architecture flourished from 1945 to the 1980s. Characterized by flat planes, large glass windows and open space, the style focused on simplistic design and seamless integration of nature. World War II brought new materials, such as steel and plywood, to the forefront of architecture and design, and helped to enlighten new ways of thinking about residential living. You can find plenty of mid-century modern homes in Windsor Forest and Magnolia Park. Contemporary Some folks consider contemporary and modern architecture to be essentially the same. However, contemporary refers to today’s building styles, which can vary in design and appearance. Both styles are similar in that they look to connect indoors and outdoors, but contemporary homes tend to emphasize energy efficiency, sustainable materials, lots of natural light and the use of recycled non-toxic materials. This style can be found in the Savannah neighborhoods Jackson Park and the Landings. Inspired by estates of the French countryside, the provincial style came to America after World War I, bringing with it decorative appeal and romantic touches. Today’s newer suburban housing developments are incorporating the French provincial style with symmetrical proportions and steep roofs. This style of home can be found in Ardsley Park and Baldwin Park. Similar to the Colonial Revival style which was popular in the same period, the Classical Revival style was more formal and monumental in its design. Relying on stylistic details of the earlier Greek Revival style, Classical Revival style buildings often have massive columns with classical Corinthian, Doric or Ionic capitals, topped by a front facing pediment.  One of the most distinctive versions of this style features a full height  columned  front porch topped with a classical pediment. This is a common style that can be found in Ardsley Park and Thomas Square. Low Country style originated in the coastal areas of the Southern United States. Southern architecture with a coastal flair represents a beloved style for many of today’s homebuyers. Low Country Home Plans feature expansive outdoor living spaces with covered porches, open floor plans and a feeling of relaxed elegance. This is extremely common on the Savannah Islands, in the Landings, and Emerald Point. Influenced by the area from which it’s named, this style became extremely popular in the U.S. from 1918 to 1940. The homes were modeled after the hacienda style, with red tile roofs, arches and plaster surfaces. This style is very popular again and features a lot of the original design elements, including porticos, balconies and ornamental details such as heavy wooden doors and multicolored tiles. A couple of these houses are sprinkled throughout Ardsley Park. First built in the 1930s, ranch homes were originally modeled after rural Western ranches. Ranch architecture bears a slight resemblance to the modern style with open floor plans and easy connections to the outdoors. Focused mainly on practicality, most ranch homes also feature an attached garage. Exterior details may vary, which allows for personalization. Single-floor and split-level floor plans live under the ranch style. There is a large number of these homes in Kensington Park, Fairway Oaks, and Mayfair Mostly found in urban areas, the row house, more commonly known as the townhouse, became popular in the early 19th century thanks to limited space and the financial benefits for the architect/builder. Homes built in this manner could go up fast and in a smaller area of land. Practicality dictates row-house design; they are typically two stories or more with a traditional layout, side hallways and minimal lawn space. This is the most common style of home in downtown Savannnah. It can be found all over the Landmark Historic District, the Beach Institute, and the north Victorian District. Victorian architecture emerged between 1830 and 1910 under the reign of Queen Victoria and include sub-styles such as Gothic revival, Italianate, Second Empire, Queen Anne, stick style, Romanesque style and shingle style. Constructed more for beauty than functionality, Victorian homes tend to be more complex in design with ornate trim, bright colors, large porches, asymmetrical shape and multi-faceted roof lines. These can be found in the Victorian District and the Starland area! Cottage originated from the word “cotters.” Cotters were European peasant farmers in the Middle Ages who lived in this style of home. A cottage-style house typically refers to a small home made of stone or wood siding. It features a curved entryway, gravel or brick front walkway and brighter exterior colors. Today, flowers typically adorn the entryway creating beautiful curb appeal. These cottages can be found in the Beach Institute, at Tybee Island, and in the Isle of Hope neighborhood. Farmhouse The term “farmhouse” doesn’t refer to style, but rather to location and function. They were originally built on rural land with an emphasis on an agrarian lifestyle. Many farmhouses were modeled after popular architectural styles at the time they were built, such as Victorian and Colonial. However, farmhouses were built for need rather than design, often featuring functional porches as a transitional space creating a much more informal and inviting exterior. Plenty of these can be found in small towns to the West of Savannah, such as Bloomingdale, Rincon, and Ellabell. With formal proportions and classic beauty, the Neoclassical style reflects architecture of Greece and Rome. In the early 20th century, government buildings and universities used the Neoclassical concept in their design. Homes built in this style clearly exude wealth. Symmetry, tall columns, elaborate doorways and evenly spaced windows are all key elements of the style. The most famous example is Thomas Jefferson’s Monticello in Virginia. These can be found in Thomas Square. Inspired by Greek architecture and democracy, the Greek revival style flourished in America in the 1830s and ’40s. Tall columns and pediments, painted plaster exterior, horizontal transoms, symmetrical shape, bold moldings and embellishments are all key to the style. Large and imposing, this home style is commonly found on large estates and historic plantations. A couple of these can be found on Dutch Island. Originating in England, the Tudor style is one of the most recognizable home styles. Best known for steeply pitched, multi-gabled roofs and decorative half-timber framing, Tudors were mostly built in established neighborhoods during the first half of the 20th century. The steep-pitched roofs are perfect for rainy and snowy climates, which is why many of these homes can be found in the Midwest and along the East Coast. A couple of these homes are sprinkled throughout Ardsley Park! Spanish Settlers from the Mediterranean fused design from Europe and Native America with their own to create a variety of home styles. Mission revival is one of the most popular, inspired by the Spanish churches built by the missionaries in the early 20th century. They typically have clay roof tiles, arched porches, arched corridors, square pillars and bell towers, as well as quatrefoil windows that resemble flowers. These can be found in Ardsley Park! Art deco comes from a variety of influences: Ancient Egypt, 1930s Hollywood and the tropical pastels of Miami Beach. Typical art deco structures have flat roofs, smooth stucco walls with rounded corners and bold exterior decorations. The style is used more often for office buildings than private homes. A couple of these can be seen in Baldwin Park!

Looking for a specific style of house in Savannah? Let’s chat!